Showing posts from June, 2008
Show all

June 26, 2008
The 0.8 version of Clutter is coming out soonish from the excellent ohand people, containing again massive improvements ! I started to love Clutter when 0.2 was released ~1.5 years ago, it was just so easy to create functional & eye candy applications with its refreshingly clean API. All started with the question "How can one make effect [XYZ] using GTK+?" and after some pondering my answer was "You can't"... Of course these requested things would have been possible with Cairo (too low-level, hard & slow) and/or "just" forking GTK+ and adding ugly magic which would make it API&ABI incompatible with 2.x (no-no-no). After some studying Clutter appeared to be the best candidate for the job, and I had a lot of fun with it during 0.2-0.4 versions. Sadly GTK+ hasn't progressed much since then when it comes to GUIs, layouts & theming are quite static, timeline is not in, no native canvas etc. Luckily offscreen rendering is progressing
Post a Comment
Read more 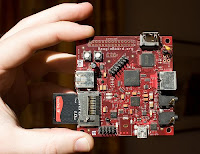 I'm waiting to get one of these in my hands! The Beagle Board is a low-cost, fan-less single-board computer based on Texas Instruments' OMAP35x device family, with all of the expandability of today's desktop machines, but without the bulk, expense, or noise.
Post a Comment
Read more
More posts